July 9th marked the third anniversary since we said goodbye to my beloved Spice girl… my pooch and cherished friend. I wrote about her on that day, before I, along with Ken (my fiance), Clara and Jason (my children), Bill and Kay (their spouses) and Raymond (a family friend) gathered around and thanked her for her love, friendship and years of leg licking before saying goodbye. You can read about it here:

I was numb at the time but now I can’t remember her without crying. There are days when I’m on my way home and think about walking her then remind myself that I no longer have to grab the leash and plastic bag to take her for a stroll. When Ken and I return from buying groceries, I sometimes expect her by the door, getting in the way of the shopping cart because she just has to find out what we got for her… somehow she knew when there was a treat or toy among the food and household goods.

Christmas mornings since she’s been gone have been especially hard. Not seeing the gift bags under the tree for her to excitedly sniff at and reach into to retrieve her presents. She’d even get excited over our presents but I suspected she thought they were all for her.

Today a friend on Facebook shared a link to a photo journal which chronicled the last hours of a handsome black Lab named Duke. http://www.buzzfeed.com/alanwhite/this-story-of-a-dogs-last-day-on-earth-is-beautiful-and-hear?bffb

And, again, the tears flowed for Spice as I recalled her last hours. She was tired from not sleeping well… the pain kept her from lying comfortably for more than a few minutes. She spent the last few nights pacing around and I felt helpless… nothing we did seemed to ease her. That last night I wrote my blog and stayed awake with her as long as I could before sleep finally overtook me for a short while. Still Spice was happy to see my children, their spouses and Raymond although she didn’t get up to greet them or lick the legs that were bared to that hot July day. We fed her slices of beef bologna (one of her favorite treats) then gently brought her down for the ride to the vet who told us to bring her after his last appointment. Once we got to his office we saw that there were still a couple of people inside with their pets so we waited outside so as not to upset anyone with our tears and somber faces.

After a while the last patient came out with his humans and Spice barked a greeting, much to Ken’s astonishment. In the months since he moved in he had never heard her bark. Her lack of barking at strangers who knocked at our door led me to believe that, if our condo had ever been robbed, she would have been a horrible guard dog probably wanting to play with the burglar(s) instead of protecting our home although I’m sure she would have attacked anyone who actually posed a threat. There was only one time she growled at someone in warning. Unfortunately that person was a police officer who walked towards us, swinging his nightstick. He remarked about what a beautiful dog she was (of course!) and approached to pet her. Hearing her growl, I asked him to not touch her so he gave us a wide berth as he walked away.

Spice was empathic especially during the time my marriage disintegrated.  Somehow she was aware that my ex-husband decided to leave and would literally lay on his feet as if to keep him from moving.  When I had bad days or moments of sadness she would jump up to her her paws on my shoulders and give me a hug.

Spice also seemed to have a sixth sense. I used to walk her on Boulevard East, from 73rd to the park on 75th Street where I’d sit with her to enjoy the view of the Manhattan skyline. For those who aren’t familiar with my neighborhood, Boulevard East runs along the edge of the Palisades cliffs that overlook the Hudson River. At some points, the only thing that separates the sidewalk from the edge of the cliffs is a rock wall. Between 74th and 75th Streets a section of the wall was covered in hand prints. Whenever we passed that spot, Spice’s ears would flatten and she’d pull at her leash so I’d hurry my pace. I thought it strange until I found out about a young man who had died years earlier when he fell off the cliffs after climbing to the other side of the wall. That section of the wall has since been replaced but you can be sure that I avoid walking past it now and can’t help but wonder whether Spice felt a ghostly presence. I do know that she sensed death and destruction in the winds that blew across the river after the attack on 9/11… her head hung low during our walks and she wouldn’t eat. I later found out from her vet that a lot of pets became upset or even depressed during that awful time.

A lot of people ask when we’ll get another pooch. They think it’ll be soon because of all the cute puppy pictures Ken and I post on each other’s Facebook pages. But now is not a good time. Not only does our busy schedules keep us from being responsible pet parents but I don’t think I could get that lucky twice. Spice was remarkable and no pooch can take her place. Maybe in a few years I’ll feel differently and head to the shelter to find another friend but I will always miss my Spice girl.

Christmas, 2007… ready to take a nap with her new toys

She never enjoyed baths, being out in the rain or even snow. She’d “do her business” quickly and hurry back to the front door

When Ken came into our lives, Spice warmed up to him quickly and found every opportunity to lie by his feet or rest her head on his lap. 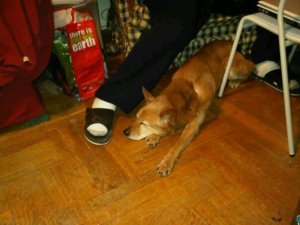 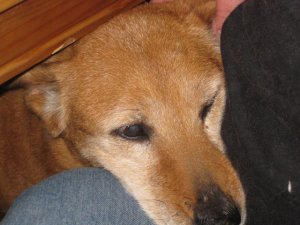 As she got older, Spice needed to also go out in the afternoon so I hired my neighbor’s daughter who would bring along her pooch, Cookie, for a walk around the neighborhood. 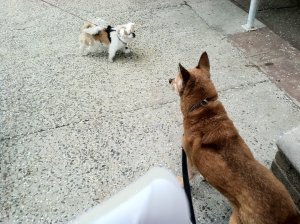 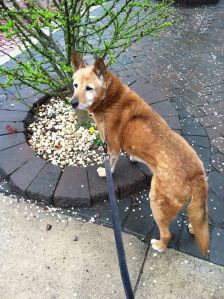 During our walks Spice and I would pass by our neighbors’ dogs. One was a tough looking but big mush Pitbull named Aries. Sometimes she’d bark at him and he’d look upset and walk away. I wish I knew what she told him. The other dog (not pictured) was Princess who barked incessantly behind the fence of their front yard. Spice would ignore Princess as we walked past and sometimes deliberately squat to pee in front of her. I thought that was a very bitchy move on Spice’s part… lol.

One of Spice’s favorite treats was a soft-serve vanilla ice cream cone. We’d wait for the ice cream truck to stop in front of our building and she’d usually gobble it up in a few bites. During her last week, I tried to entice her with a cone but she was too uncomfortable to enjoy it. When we got upstairs, Ken coaxed her into taking a few licks before it melted.

Now in my 50's and still a work in progress. Proud, happy mom of 2 wonderful kids who are married to equally wonderful people. Patiently waiting on grandchildren to spoil. In love with, and happily engaged to, my best friend and looking forward to the rest of the journey on this planet by his side.
View all posts by EmilyD →
This entry was posted in Uncategorized. Bookmark the permalink.